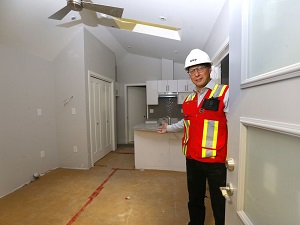 As reported in the Calgary Sun, a flagship community of tiny homes is set to make a huge difference in the lives of homeless veterans and the father of a fallen soldier is glad to have a role in the project.

The Homes for Heroes Veterans Village in Calgary’s southeast neighbourhood of Forest Lawn will welcome its first 15 tenants in October, signifying the first community of its kind in Canada. To keep their memories alive, each home is being dedicated to one of Calgary’s fallen soldiers.

When Murray Marshall heard one of the homes would be named after his son, Steven, the career-carpenter immediately requested he assist in the construction of the village.

“We’ve never been where these kids go and where they perish. They went there for us and it’s great to keep their memory alive through the houses,” said Marshall.

Marshall lost his twenty-four-year-old son when he was killed by a landmine during a deployment in Afghanistan in 2009. Marshall said veterans have a special connection with the fallen because they understand what deployment is like. He’s proud one of the homes will be named the Steven Marshall House and hopes it will bring people the kind of joy that his son brought others.

“We can’t change what happened but if someone drives by these houses, Steven’s friends or kids he went to school with or teachers, they’ll think of him and smile. They’ll think about Steve and there won’t be tears; it will bring a smile to their face,” said Marshall.

He’s been assisting with the construction of the homes on a two-week contract with ATCO, the company that funded the $70,000 homes by giving a $1.5 million in-kind gift .