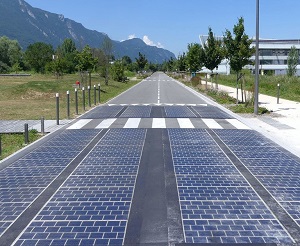 As reported on BusinessInsider.com, solar roads were promised to be one of the biggest unprecedented revolutions of our time, not just in the field of renewable energy but in the energy sector generally.

Covering 2,800 square meters, Normandy’s solar road was the first in the world, inaugurated in 2016, in Tourouvre-au-Perche, France.

Despite the hype surrounding solar roads, two years after this one was introduced as a trial, the project has turned out to be a colossal failure — it’s neither efficient nor profitable, according to a report by Le Monde.

The unfortunate truth is that this road is in such a poor state, it isn’t even worth repairing. Last May, a 100-meter stretch had deteriorated to such a state that it had to be demolished.

According to Le Monde’s report, various components of the road don’t fit properly — panels have come loose and some of the solar panels have broken into fragments.

On top of the damage and poor wear of the road, the Normandy solar track also failed to fulfill its energy-production goals. The original aim was to produce 790 kWh each day, a quantity that could illuminate a population of between 3,000 and 5,000 inhabitants. But the rate produced stands at only about 50% of the original predicted estimates.

In its second year, the energy production level of the road further dwindled and the same downward trend has been observed at the beginning of 2019, indicating serious issues with efficiency.

Even rotting leaves and thunderstorms appear to pose a risk in terms of damage to the surface of the road. What’s more, the road is very noisy, which is why the traffic limit had to be lowered to 70 kmh.