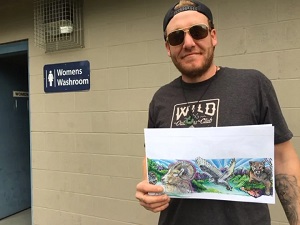 As reported on CBC News, the McDonald Park Neighbourhood Association in Kamloops is fundraising to install two new murals on the outside of the park’s washroom and change room buildings, in the hope it will help deter vandalism.

McDonald Park, located in the southern Interior city’s North Shore neighbourhood, has had challenges with vandalism, loitering, drug use and other “less than desirable activity,” said association member Sarah Johnstone.

“We’ve been looking at creative ways to also help deal with that,” he said. “This was just a way to partially clean up the buildings.”

The association looked to the City of Victoria as an example of where murals have had a positive effect on parks, said Johnstone.

“We want to do anything we can to keep bringing positive elements to this park, because it’s so fantastic.”

The neighbourhood association has hired artist Kelly Wright, who painted the Blue Grizzly mural near Seymour Street and Third Avenue among others, to paint the murals.

They expect it will cost around $20,000 for the whole process, including labour and materials. So far, they have raised just just over half of that amount, with the help of a grant from the city.

“We really want to encourage more foot traffic, more people here to enjoy local art and to help just keep the park safe and secure for everyone who uses it,” said Johnstone.