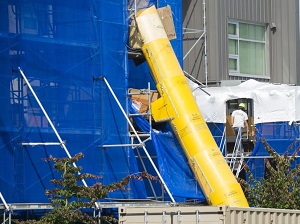 As reported in the Vancouver Sun, only nine years after a local company was paid $8.5 million to construct a 51-unit social housing building in Vancouver, provincial taxpayers are on the hook for extensive repairs there expected to cost $4.5 million.

It’s not clear who is responsible for the deficiencies at the Dunbar Apartments on Vancouver’s west side. For now, the province is footing the bill for the repairs, which a building maintenance professional described as a “hugely unusual” amount of work for a building that new.

B.C. Housing, which owns the building, said by email that repairs and upgrades were expected to take 12 months using money drawn from the province’s capital renewal fund. It said it had identified “deficiencies with some of the materials and construction methods utilized on the exterior of the building.”

The four-storey Dunbar Apartments, on the southeast corner of West 16th Ave. and Dunbar Street, was completed in 2011. It has 51 studio apartments with support services for people who were homeless or at risk of homelessness. It was one of 14 supportive housing projects built in Vancouver at that time, in a partnership among the city, province and local non-profits.

Repairs have been underway for most of this year, and it’s under scaffolding and a bright blue covering, much like those that were commonplace in Vancouver during the leaky-condo crisis in the 1990s. The crisis led to a commission of inquiry in 1998 and updated building codes. It’s not clear if the issues at the Dunbar Apartments have anything to do with those building codes.