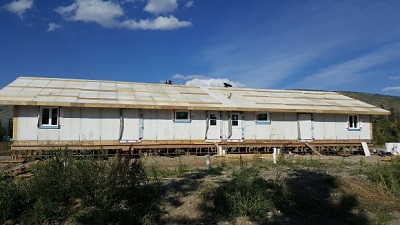 A project to bring some much-needed housing to Ross River, Yukon, has apparently gone off the rails, with the Ross River Dena Council (RRDC) cancelling a construction contract for some duplexes and tearing down the partially-built and “structurally unsound and unsafe” units.

Now, the First Nation says that company is insolvent, and the work it left behind is a mess.

“At this point in time, we have three partially-constructed buildings which have to be torn down,” said the RRDC’s lawyer, Jim Tucker.

“You could actually — I actually did — stand inside the building and look up and you could see blue sky,” he said.

“The one aspect of each of three duplexes that actually works is the foundation.”

The project began when RRDC secured $1,679,000 from Indigenous and Northern Affairs Canada (INAC) to build the duplexes. The First Nation says it then received a proposal from AYO to construct the units, relatively quickly and on budget. It also promised energy-efficient units that might make money for the community, by actually providing power back to the grid.

Work began, and it was originally promised to be done by last March — but that deadline came and went.

AYO asked for an eight-month extension, according to RRDC, and then last summer asked for another $700,000 to finish the work.

At the same time, the First Nation noticed that AYO’s work looked a little different from the original plans.

“RRDC began to be concerned that the duplexes being constructed by AYO might not be suitable for the climate in Ross River, or even safe,” says a statement from the First Nation.

RRDC, working with INAC and the Yukon Housing Corporation, then hired an engineering firm to inspect the units. The First Nation says it also told AYO what was happening.

In September, the engineers arrived in Ross River, along with Tucker.