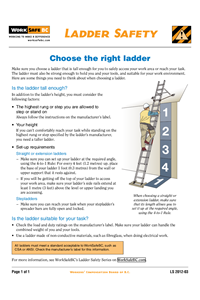 Richmond, B.C. (Nov. 30, 2017) — WorkSafeBC has released six new ladder safety videos to remind workers, employers and homeowners to use ladders safely, both on the job and while decorating at home for the holidays.

“Last year, more than 1,000 workers were seriously injured in falls from height, including while using step ladders, extension ladders and scaffolding,” says Dan Strand, Director of Prevention Field Services for WorkSafeBC. “The new videos and our ladder safety resources illustrate how the right ladder, the correct positioning and hazard assessments could prevent a life-changing serious injury or death.”

It’s time to use ladders safely: