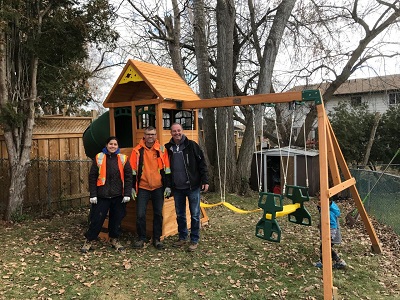 A Wish Comes True: Young Boy with Rare Genetic Skin Condition Receives a Playground of his Own 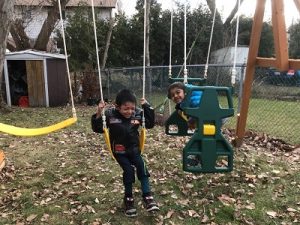 For most children, a romp at the park with fellow youngsters is part of a typical day. The sounds of exuberant children running, and giggling fill the air as they play on swing sets on a weekend or part of after school play. This unfortunately was not a reality for five-year-old Ahmed Hussaini Syed, as going to public playground was considered too risky for his delicate skin which blisters and shears off with the slightest bit of friction. To make life easier, Ahmed’s wish for a playground in his own backyard became a reality thanks to DEBRA Canada’s EB Ambassador Wish Program and three kind volunteers from PCL Construction who volunteered two days of their time to build and make Ahmed’s wish become a reality.

Epidermolysis Bullosa (EB for short), has been described by those in the medical community as “the most painful disease you’ve never heard of.” Globally, EB affects 1 in 17-20,000 live births. There are approximately 2500 cases of EB in Canada. This rare genetic condition in its worst forms causes the skin to shear at the slightest touch, causing painful, open blisters and wounds. EB can mean a life of extreme pain, disability and it is often fatal in infancy in the Junctional Herlitz type. The youngest with EB are often referred to as “butterfly children” because their skin is said to be as fragile as a butterfly’s wing. Currently, there is no cure for EB.

“We were always afraid to bringing Ahmed to a public park”, explains his mother Ghaziya. “EB is so rare and it was unrealistic for us to assume that other children would understand his special needs. He had pleaded for years and has spent many hours enjoying the plastic playhouse at SickKids. I always thought it to be a distant dream, but thanks to DEBRA Canada’s Butterfly Wish Program… his dream has come true. “

The beginning of December is not a common time of year for children to be enjoying an outdoor play structures. But it is ideal for EB skin; as hot summer days are avoided, as heat tends to aggravate blistering.

“We were a little worried about getting the job completed before the first big snow fall. In fact, we struggled with finding a reliable contractor to assemble the play structure”, explains Erin Hoyos, Project Coordinator for DEBRA Canada. “As PCL employees have supported DEBRA’s volunteer efforts in the past, they heard we were in need and generously provided three volunteers to build the play structure free of cost, leaving more funds available to fulfill future wishes.”

“It’s amazing how volunteering just a few hours of time can grant such a priceless reward,” says Clare Francis, workforce manager of Agile, PCL Constructors Canada Inc. (Toronto)’s offsite manufacturing facility. “Once we safely completed the structure, my colleagues Gail, Rob and I were able to witness Ahmed and his brother try the play set for the first time. It was very rewarding to play a small role in bringing such happiness to their family, especially just before the holidays.”

The Ambassador Fund a Butterfly Wish Program was launched in 2014, by patient ambassadors Jonathan Pitre from Russell, Ontario and Deanna Molinaro from Stoney Creek, Ontario. Pitre’s wish for to see the Northern lights went viral and sparked nation-wide media attention. Dedicated supporters continue to follow Pitre’s progress as he continues to recover from a clinical trial blood and bone marrow transplant in Minnesota, USA.

Explains Pitre, “It’s so hard for most of us watching from the sidelines while other kids do the things we most want to do. Having been able to keep the EB Ambassador Wish Program and seeing more patients having their wishes come true really warms my heart. It brings me hope and I wish it brings others hope too because sometimes hope is all we have to go on. I’m very happy and grateful by the generosity of our supporters/donors for giving us the opportunity to bring joy and happiness to our Canadian EB community.”

Recently the Ambassador Wish program assisted with the purchase of a Sit-ski for a seven-year-old EB patient in North Vancouver, BC, and helped an Adult EB patient from Mississauga, Ontario complete a cycling awareness journey from Alberta to Ontario.

EB is an inherited, lifelong, recurring blistering disorder which affects the skin and internal organs. It causes agonizing pain and in severe forms, dysfunction of limbs and deformity of appendages. It affects both genders and people of every race and ethnicity. EB causes a person’s skin to be so delicate that it’s often associated with the fragility of a butterfly’s wing… hence youngest affected are often referred to as “butterfly children.” EB ranges from mild (EB Simplex) to so severe (JEB Herlitz) that 87% of babies die before the age of one. People with EB are often swathed in gauze or specialized bandages. A rare disease affecting an estimated one in 17-20,000 globally, there are about 2000 Canadians with Epidermolysis Bullosa. Approximately half a million-people world-wide have EB.

DEBRA Canada is the only national non-profit charitable organization in Canada that is dedicated to assisting patients and their families who suffer from Epidermolysis Bullosa. The organization is a member of DEBRA International (www.debra-international.org), which has chapters in about 40 countries around the world. To make an online donation or find out more about EB and how YOU can help, visit www.debracanada.org

PCL is a group of independent construction companies that carries out work across Canada, the United States, the Caribbean, and in Australia. These diverse operations in infrastructure, heavy industrial, and buildings markets are supported by a strategic presence in 31 major centres. Backed by PCL’s 110-year legacy, and with more than four decades of experience in Southwestern Ontario’s dynamic construction market, the Toronto office is PCL’s largest district with more than 550 of the construction industry’s most-talented professionals and an annual construction volume of more than $1.0B. For more information, visit PCL.com/Toronto. Connect with us on: LinkedIn, Facebook, Twitter, YouTube, Instagram.