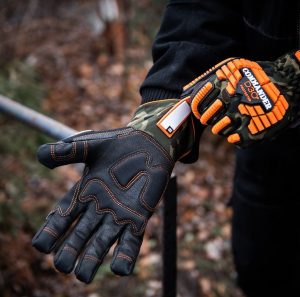 VANCOUVER, June 6, 2019 /CNW/ – Recognizing the tremendous contribution veterans and first responders make to our country, Watson Gloves is donating partial proceeds from the sale of two new products to Wounded Warrior Canada. The two newly created styles of performance gloves, Shock Trooper and Commander, both offer superior impact, oil and cut resistance.  They are gloves for those that work on the front line and are available for purchase instore or online at amazon.ca.

In 1918 John Watson founded Watson Gloves in one of the more challenging years in Canadian history, 1918, six months before WW1 ended.  Twenty one years later, when WW2 threatened Canada with an economic crisis, existing manufacturing orders were canceled, some factories shut down and construction halted on many pre-war civilian projects.  However, manufacturers creating supplies for the war efforts needed quality hand protection.  It was challenging for Watson to find young workers throughout the wars to help make gloves as many were off to fight, but older men and women filled the positions until the boys got back.  John Watson promised their jobs would be there.  101 years later Watson Gloves remember our veterans who fought for our country.  Watson remembers where their company began, and how they got to where they are today.

Family is extremely important to Watson Gloves as well as giving back to local communities. They are proud to support Wounded Warriors Canada, an organization that provides a wide range of programs and services for Canadian Armed Forces members, Veterans, first responders and families affected by Operational Stress Injuries.  For those that serve our communities here in Canada, and abroad, Watson Gloves thanks you.

“We thank all of you that make our lives safe and protect us”, says Martin Moore, President of Watson Gloves.

Scott Maxwell, Executive Director of Wounded Warriors Canada, commented, “We have created an innovative approach to mental healthcare that uses clinical best practices and evidence informed care to create an environment of compassion, resiliency and hope for Canada’s ill and injured Veterans, First Responders and their families. Our life-changing programs would simply not be possible without the support from caring and compassionate Canadians and Canadian businesses like Watson Gloves.”

Wounded Warriors Canada is a national mental health charity whose mission is to honour and support Canada’s ill and injured Canadian Armed Forces members, Veterans, First Responders and their families. The organization provides a wide range of programs and services for individual members and families affected by Operational Stress Injuries.

When Watson Gloves opened its doors in 1918, we were a two-man shop selling gloves to Vancouver’s dock workers. Today, they’ve grown into Canada’s largest retail distributor of great-quality gloves for work, home and play. Watson Gloves has locations in Vancouver, Calgary and Mississauga. Gloves are sold across Canada, at select retailers in the US, and internationally. With over 2,000 different styles, product categories range from construction, home improvement, automotive, gardening, motorcycle, recreational and more. Check out our website at www.watsongloves.com and follow Watson Gloves on Instagram, Facebook and Twitter!