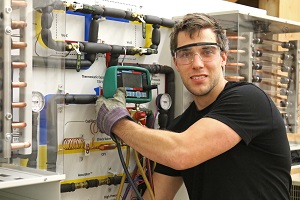 VIU’s Refrigeration Mechanic program takes training to the next level

The program, which trains students to install, service and troubleshoot all aspects of residential, commercial and industrial heating, ventilation, air-conditioning and refrigeration (HVAC/R) equipment, just began offering Level 3 apprenticeship training for the first time, enabling students who would have had to travel to the Lower Mainland to get this training to stay on the Island and keep working. The University already offers 8.5-month foundation/Level 1 courses to introduce students to the trade, as well as Level 2 training out of the Cowichan Trades Centre.

What’s significant about offering this higher level of training is the opportunities it opens up for students, not only in terms of a wider range of job opportunities, but also better salaries, says program chair Larry Nohr.

“Level 3 apprenticeship training often comes with a significant pay raise because you are able to do a lot more, be on your own doing service calls and installations as opposed to needing a lot of supervision,” says Nohr. “Having the training here makes all the difference for some of our students. Several have young families and were just working out in the field for years, waiting for us to offer this training on the Island.”

Josh Dares, who returned to do his Level 3 training this spring as soon as it became available, estimates that it would have cost him an extra $6,500 to do the training in Vancouver.

“I was still willing to do it because it was the only option, but I know many of the other students have families and didn’t have that option,” he says.

Dares has been working for Salish Sea Heating and Ventilation Ltd. on Saltspring Island since he graduated from the foundation course in 2016. By the time he finished his Level 3 training in February, he already had a job offer from a Victoria company.

“The more training you have, the more opportunities you have,” says Dares. “My experience in the field combined with the Level 3 has allowed me to put two and two together now and I’m able to go on calls by myself. This is a trade where you really need the proper training to know what you’re doing. Every day is so different, sometimes you’re doing mechanical repairs, sometimes electrical. There’s lots of problem-solving involved.”

There are four levels of apprenticeship training in the Refrigeration and Air-Conditioning trade, and once students complete Level 4, they are eligible to write their Red Seal exam, which enables them to work in any area of the trade they wish and take their training across Canada and to other parts of the world.

Nohr says in future, VIU hopes to offer Level 4 training as well. Three-quarters of the energy used on the planet comes from heating and cooling, so RACM mechanics are in high-demand, he adds.

“It’s one of the highest paid and probably one of the most in-demand trades, but it’s hard to get into – because so many mechanics work alone, people new to the trade don’t have the same number of opportunities to apprentice under a Red Seal mechanic,” says Nohr. “Most contractors require employees to take a foundation course. The last stats I received showed a zero unemployment rate for Red Seal-certified mechanics.”

The foundation course at VIU includes shadow training on Fridays, where students volunteer with local contractors and non-profit groups to get hands-on, real-world experiences that make them more employable and often lead to full-time positions in the industry.