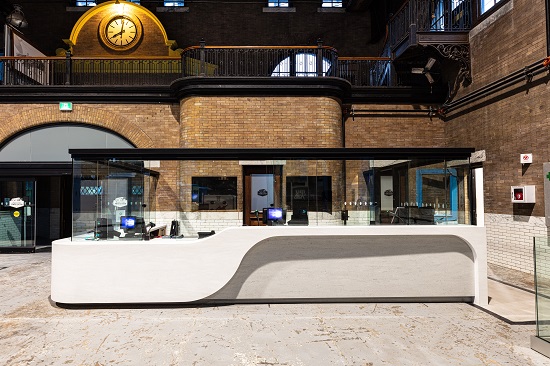 +VG Architects is pleased to announce that Niagara Parks Power Station has won the 2022 Niagara Biennial Design Awards Grand Prize. +VG Architects was Architect of Record and Contract Administrator in the adaptive reuse of the 115-year-old intact hydro power station into an educational and entertainment destination that brings the magic of electricity and its history alive. The project won the 2021 Lieutenant Governor’s Heritage Award for Excellence in Conservation.

The interior showcases restored artifacts and interactive exhibits. Preservation of cultural heritage attributes were critical in the design process. Retail space, offices and washroom facilities were seamlessly integrated into the historical structure. The tail race tunnel brings guests down 55 metres in a glass-paneled elevator to a new observation deck at the river’s edge.

The expansive generator hall with its gabled ceiling and exposed steel supports was maintained along with the generators. What began as an industrial-scale production of electricity at Niagara Falls has evolved into a multi-faceted visitor experience.

The jury commented: “This magnificent project received a Grand Prize for its approach to adaptive reuse. It is like no other project submitted and is beautifully executed. The project displays the archaeology of modern tools and is a cultural heritage artifact of the pioneering electrical era. The roots of Niagara’s electrical power generation over the past century are skillfully captured in the design. It represents an incredible investment and the will of executing a project to such a high quality.”

Just as Niagara Falls is Canada’s signature, globally recognized natural attraction, the 587-foot-long Niagara Parks Power Station symbolizes Canada’s contribution to the modern industrial era. Constructed between 1901 and 1905, it occupies a unique position in the history of the electrical and industrial revolutions, for it is here that George Westinghouse and his business partner Nikola Tesla used their generators and alternating current (AC) to supply electricity on an unprecedented scale. Financed by J.P. Morgan and other business titans who recognized the transformational impact of this power station, the plant became the global model for the fledgling hydroelectric power industry.

“Converting such a historic property, located at one of the world’s wonders, was a once-in-a-lifetime opportunity and a great honour,” says Paul Sapounzi, President and Managing Principal of +VG Architects. “And now, with renewable, carbon-zero power sources in the news, this building, the prototype for green energy generation, is more relevant than ever.”

“As the stewards of the last power station in the world of this size and vintage that’s completely intact, we wanted to maintain the building’s heritage, while developing Niagara Falls’ newest attraction,” says Kim Viney, former Senior Director of Business Development at the Niagara Parks Commission, the building’s owner. “This is a key monument in Canada’s cultural and economic history.”

The Niagara Biennial was established to recognize and celebrate design excellence of the built environment throughout Niagara. The jury members, who evaluated 35 entries, were Linda Carreiro, Associate Dean of Fine and Performing Arts at the Marilyn I. Walker School of Fine and Performing Arts at Brock University; architect Gordon Stratford, Chair of the City of Toronto’s Design Review Panel; Eldon Theodore, Partner at planning and urban design firm MHBC; Sheila Boudreau, Principal Landscape Architect and Planner at SpruceLab; and planner and architect Eric Turcotte, a Partner at Urban Strategies and President of the Council for Canadian Urbanism.