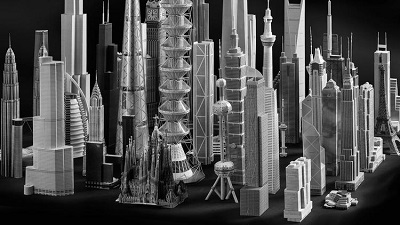 Some might assume that an exhibit at Yale School of Architecture would appeal only to architecture and structural-engineering buffs. But the current exhibit will fascinate anyone who wonders what cities might look like in the future.

“Vertical Cities” focuses on the world’s tallest buildings. More than 200 skyscrapers are represented in 1:1000 scale models. Only six U.S. buildings make the top 50 in height. As “vertical cities” go, metropolises in China, Malaysia, South Korea, Saudi Arabia and the United Arab Emirates make New York City seem underdeveloped and make Europe look like a step back into the 19th century.

The most intriguing aspect, however, is the discussion of where architecture must go to build the cities of tomorrow. The proposed projects are mind-boggling, even frightening.

The Earth is only so big and more people are moving to urban areas. Can cities and the Earth continue to sustain billions of people? Where will they all live? What will happen to the human race if these new solutions never come to fruition?

So far, none of these super-city dreams has been realized, through reasons ranging from governmental push-back, environmentalists’ protests, lack of appropriate building materials or just the fact that the architect considered his scheme more a fanciful dream than a real possibility.

Keep reading in the Hartford Courant