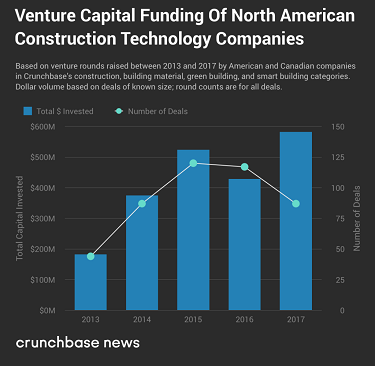 Venture capital investment in the construction industry to surge in 2018

Recognizing opportunities to disrupt the multi-trillion dollar construction industry, a slew of startups are focused strictly on developing technologies to make construction projects go more smoothly while increasing productivity and efficiencies. Investors are joining the game, with a number of venture capital firms formed with the purpose of investing in construction technology.

As evidence of the growing interest in the field, funding in North American construction technology startups surged by 318 percent to $581.6 million in 2017 compared with $182.7 million in 2013, according to Crunchbase data. Investors pumped dollars into 87 known North American deals last year compared to 44 in 2013.

Those figures are expected to go way up in 2018. In January, one startup alone—Menlo Park-based Katerra—brought in $865 million from Softbank, RiverPark Ventures, and Four Score Capital in a Series D round. That’s more than the whole sector raised in 2013 and 2017 combined.

According to its Crunchbase profile, the startup optimizes “every aspect of building development, design, and construction.” It has raised $1.1 billion since its inception in 2015.

A number of other companies in the space are growing. San Francisco-based Rhumbix has raised more than $20 million to develop its mobile platform designed for the construction craft workforce. Most recently, it brought in $7.4 million in a Series A round last September.

Carpinteria, Calif.-based Procore Technologies, which has developed a cloud-based construction management software application and is backed by investors such as Bessemer Venture Partners and ICONIQ Capital, has raised $229 million over time. San Francisco-based PlanGrid also markets a cloud-based productivity software that aims to help owners, general contractors, and subcontractors collaborate on blueprints and building documents from any device. It raised a $50 million Series B round last September and has brought in $69 million in total since it was founded in 2011.