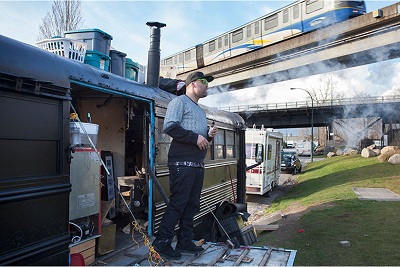 Kevin Royes lives the Vancouver real estate economy.  At the end of a long day landscaping at a newly-built 18,000-square-foot mansion in West Vancouver, he catches a ride home to his 1973 Dodge Sportsman in a pop-up RV park tucked away in an East Vancouver industrial area.

He is one of a number of construction industry workers illegally camped within sight of downtown high-rises, which on a sunny afternoon gleam in the distance like unattainable beacons of wealth.

There are about 20 inhabited vehicles parked beneath the Skytrain line near Glen Drive. But in Vancouver and North Vancouver, where rents are among Canada’s highest and vacancy rates less than one per cent, there are at least seven other pockets where people live full-time in vehicles tucked behind shopping malls or big box stores. Some, like Royes and Mike Diddy, whose home is a converted school bus, are employed in the region’s booming construction trade. Others are engaged in less savoury lines of work and others still are pensioners down on their luck.

“There’s definitely some riff-raff, some seediness,” says Diddy, 38. “But there are also people who don’t want to throw their money away in a cramped little apartment with a view of a back alley.”

Diddy works as a drywaller on two towers where the cheapest condo costs $500,000. And although he clears more than $4,000 a month, his wages don’t go far in Vancouver, where monthly rents for new one-bedroom apartments run upward of $1,700. “For me to get a place I’d want to be, I would have to have two or three roommates and we probably wouldn’t get along at the end of it.”

Diddy, also a DJ, owns a matte black 1991 Blue Bird school bus that he drives to summer music festivals. Last June, after a run-in with his landlord, he moved into it full-time. Since then, he’s saved more than $10,000.

It is not illegal to live in a vehicle, but city bylaws prohibit oversize vehicles from parking on city streets for more than a few hours. Those whose vehicles still run try to move them at least a few feet every day. City officials are aware of the campers and generally don’t hassle the inhabitants unless someone complains. An adjacent business recently called in after one motorhome occupant ran an extension cord across the boulevard to steal power from an outdoor plug. That triggered a round of tickets, which start at $70, for everyone camped along the street.

Continue reading this article on Macleans.ca