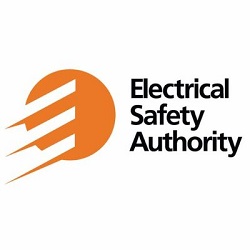 MISSISSAUGA, ON, Oct. 30, 2017 /CNW/ – On Oct. 10, 2017 Jose Julio DeNobrega was convicted in a Burlington court and ordered to pay a $45,000 fine plus a $5,625 victim fine surcharge for conducting unsafe electrical work without an electrical contractor’s licence at 14 locations in Hamilton, Burlington and Oakville.

Much of the electrical work DeNobrega did was found to be non-compliant with the Ontario Electrical Safety Code. The most serious instance was when DeNobrega removed an electrical meter from an apartment building wall, leaving live wires and electrical parts exposed to the public and putting himself at major risk of an electrical injury. If someone touched the exposed wires, they could have received a fatal shock.

“We will not stand idly by while illegal electrical work done in Ontario puts the public at risk,” says Scott Saint, Chief Public Safety Officer, Electrical Safety Authority (ESA). “Electrical safety is a shared responsibility among contractors, homeowners and the public. We all need to do our part – and comply with the law – to ensure a safer Ontario for everyone.”

“The laws for conducting electrical work in Ontario are very clear: only a Licensed Electrical Contractor can do electrical work for hire,” adds Normand Breton, Director of Contractor Licensing, ESA. “In this case, Mr. DeNobrega broke the law, provided misleading information and put the public at risk. This simply won’t be tolerated by ESA and this conviction has indicated it won’t be tolerated by the courts either.”

DeNobrega provided the general contractor he was working with a false document containing an Electrical Contractor Registration Agency (ECRA) /ESA licence number that did not belong to him.

By law in Ontario, Licensed Electrical Contractors are the only contractors allowed to conduct electrical work for hire. When hiring someone to do work, homeowners and businesses are reminded to:

If anyone believes DeNobrega – who has also been known to operate as Phoenix Electrical Contractor – did electrical work on their property, contact ESA’s Customer Service Centre at 1-877-ESA-SAFE (372-7233) and ESA can address your concerns.

To verify or find a Licensed Electrical Contractor, visit http://findacontractor.esasafe.com.

About the Electrical Safety Authority

The Electrical Safety Authority’s (ESA’s) role is to enhance public electrical safety in Ontario. As an administrative authority acting on behalf of the Government of Ontario, ESA is responsible for administering specific regulations related to the Ontario Electrical Safety Code, the licensing of Electrical Contractors and Master Electricians, electricity distribution system safety, and electrical product safety. ESA works extensively with stakeholders throughout the province on education, training and promotion to foster electrical safety across the province.

More information on the Electrical Safety Authority can be found at esasafe.com, through https://twitter.com/homeandsafety and on Facebook at www.facebook.com/ElectricalSafetyAuthority. ESA’s Customer Service Centre can be reached at 1-877-ESA-SAFE (372-7233).