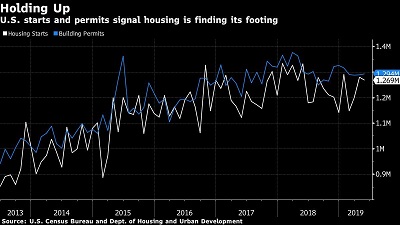 U.S. housing starts stabilize as building permits edge up in May

As reported on Yahoo Finance, U.S. new-home construction fell in May after an April reading that was stronger than initially reported, signaling stabilization in the market amid lower borrowing costs.

Residential starts dropped 0.9% to a 1.27 million annualized rate after a revised 1.28 million pace in the prior month, according to government figures released Tuesday that compared with a 1.24 million estimate in Bloomberg’s survey. Permits, a proxy for future construction, increased 0.3% to a 1.29 million rate that was about in line with estimates.

Permits increased to the best level since January in a sign that the market is poised to hold up during the busy summer season despite the dip in starts. Still, housing has shown signs of weakness including a report Monday that homebuilder sentiment fell for the first time this year on rising construction costs and trade concerns.Reports due over the next week are forecast to show existing home sales, which make up the majority of the U.S. housing market, rose in May while the pace of new home sales also increased.

“Although housing prices continue to show signs of cooling and some other housing indicators have wobbled in recent months, this morning’s starts and permits data suggest little cause for immediate concern,” JPMorgan Chase & Co.’s Jesse Edgerton wrote in a note. Still, there’s “little sign of a decisive pickup.”