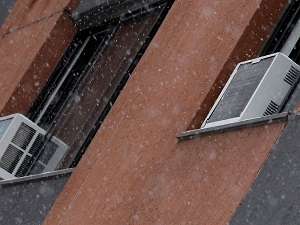 As reported in the National Post, a two-year-old girl died in Toronto after an air conditioner fell from an eighth-floor apartment, police said Tuesday.

Const. Caroline de Kloet said the child died in hospital after she was hit Monday around 3:30 p.m. outside an east-end apartment building.

“It’s a terrible tragedy,” de Kloet said. “From the interviews that investigators have done, they’ve come to the conclusion that there won’t be any criminal charges.”

The air conditioner that fell was a window-mounted unit, she said.

The death occurred at a building operated by Toronto Community Housing, which said it is investigating the incident.

“We are looking into this,” spokesman Bruce Malloch said Tuesday. “This is a tragic situation.”

He said the organization has a program that encourages tenants to swap out window air-conditioning units for floor models, free of charge, for safety reasons.

“It’s a safety issue,” Malloch said. “A floor model will not fall out of a window and are also more energy efficient and that has a safety component as well — not to overload the wires.”

The organization offered that exchange program in the same building in the summer of 2018, he said.

“Our approach to air conditioners is we recognize they can have a serious safety risk if they are not properly installed,” he said.

Malloch said tenants must ask for permission from the landlord in order to install an air conditioner in the unit.

The units must also be installed by a recognized professional to meet safety regulations, according to Toronto Community Housing’s website. The tenant also must provide proof of proper installation.

“My thoughts are with the family involved and the people in that building,” Tory told reporters Tuesday. “I’m sure it is traumatizing for them.”