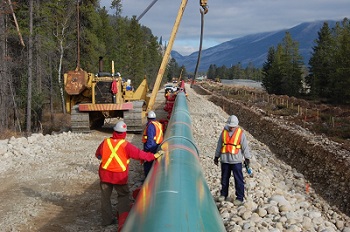 Trans Mountain Expansion project on hold and now in jeopardy

In a move reminiscent to what TransCanada did a month before it put the kybosh on the Energy East Pipeline Project, Kinder Morgan put out a press release Sunday, April 8, in which the company said it would curtail spending on the project if things didn’t change with the Province of British Columbia, essentially immediately.

That press release brought swift response from the premiers of Alberta and British Columbia, as well as Jason Kenney, Alberta’s leader of the opposition who is in strong contention in that province’s next provincial election. The reaction from both Alberta’s premier and leader of opposition indicate that province is ready to go to economic war to make sure that pipeline is built, including going so far as taking a stake in the pipeline.

First off, the press release from Kinder Morgan said, “Kinder Morgan Canada Limited (KML) today announced that it is suspending all non-essential activities and related spending on the Trans Mountain Expansion Project. KML also announced that under current circumstances, specifically including the continued actions in opposition to the project by the Province of British Columbia, it will not commit additional shareholder resources to the project. However, KML will consult with various stakeholders in an effort to reach agreements by May 31st that may allow the project to proceed. The focus in those consultations will be on two principles: clarity on the path forward, particularly with respect to the ability to construct through B.C.; and, adequate protection of KML shareholders.”

“As KML has repeatedly stated, we will be judicious in our use of shareholder funds. In keeping with that commitment, we have determined that in the current environment, we will not put KML shareholders at risk on the remaining project spend,” said KML chairman and chief executive officer Steve Kean. The project has the support of the Federal Government and the Provinces of Alberta and Saskatchewan but faces continued active opposition from the government of British Columbia.

“Today, KML is a very good midstream energy company, with limited debt. The uncertainty as to whether we will be able to finish what we start leads us to the conclusion that we should protect the value that KML has, rather than risking billions of dollars on an outcome that is outside of our control,” Kean said. “To date, we have spent considerable resources bringing the project to this point and recognize the vital economic importance of the project to Canada. Therefore, in the coming weeks we will work with stakeholders on potential ways to continue advancing the project consistent with the two principles previously stated.”

KML had previously announced a “primarily permitting” strategy for the first half of 2018, focused on advancing the permitting process, rather than spending at full construction levels, until it obtained greater clarity on outstanding permits, approvals and judicial reviews. Rather than achieving greater clarity, the project is now facing unquantifiable risk, the company said.