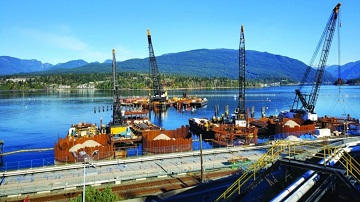 When Prime Minister Justin Trudeau tweeted in mid-July that the Trans Mountain expansion project “is going forward, and work is getting started this construction season,” a typical reply was “I’ll believe it when I see it.”

Given all the protests and legal and political setbacks it has suffered, that skepticism was understandable. But the $7.4 billion to $9.3 billion pipeline twinning project is now under construction.

Also going ahead is $150 million worth of investments in new vessels and bases by the Western Canada Marine Response Corp., which paused its expansion following a Federal Court of Appeal decision that quashed the original approval of the pipeline twinning project.

As of September 30, 2,200 workers had been hired, and are now working, mostly at either end of the pipeline, in Burnaby and Edmonton. Those numbers were originally expected to reach 3,000 by the end of this year.

“We’re definitely excited to see it get underway because it’s going to mean an awful lot of employment for British Columbians and Albertans,” said Patrick Campbell, Canadian pipeline director for the International Union of Operating Engineers.

Campbell’s union represents about 35 per cent of the workers on three of the pipeline segments or “spreads” in B.C. At peak construction, each spread will employ about 350 construction workers, tradespeople, truck drivers and labourers.

“I think every British Columbian who’s qualified to do this kind of work will be busy,” Campbell said. “These projects are nation-building in their scale because, I think, it will be reasonable to call upon other Canadians to augment the workforce.”

Security perimeters have been cast around some of the key construction areas, like the Burnaby tank farm and Westridge Marine Terminal. In the Lower Mainland, much of the work going on now is concentrated at the Westridge site, where barges, cranes, derricks and other heavy machinery are working to expand the existing terminal, which will have three berths for oil tankers. The work also involves extending the foreshore.

In B.C., some of the most intensive construction work will be done in Burnaby. There, in addition to the expansion of the Westridge terminal, 14 new oil storage tanks will be built at Trans Mountain’s tank farm on Burnaby Mountain, bringing the total number of tanks to 26.

The terminal and tank farm will be connected by pipeline. That section of pipeline will require boring a 2.6-kilometre tunnel through Burnaby Mountain. That work is expected to start sometime in 2020.