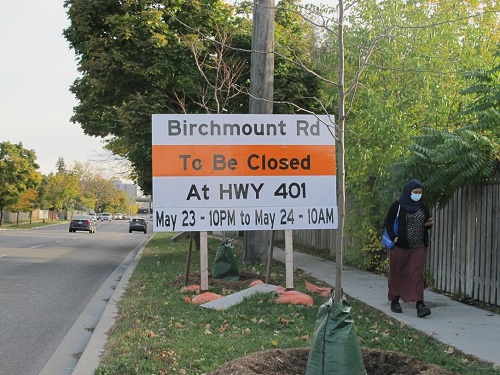 There’s nothing like an outdated construction sign to create the impression that the city can’t or won’t clean up after itself.

People rightly place high value on how things are put back in order, once a messy construction project is done. When a street is still littered with junk after a job is completed, it sends the message that whoever did it doesn’t care about the details.

That careless approach can also extend to the signage that informs drivers about road construction, which seems to be harder to get rid of than it should be.

I got an email from David McElroy with “Toronto the Ugly” in the subject line, about a construction sign on Birchmount Road that outlived its usefulness last spring.

“Does the city not require/enforce the cleanup of construction sites after the work has been completed?” asked McElroy in a note to 311, which he also sent to me.

His email to the city included a photo of a sign on southbound Birchmount, just north of the Highway 401 overpass, which said Birchmount would be closed from 10 p.m. on May 23 to 10 a.m. on May 24.

“This is but one of countless examples around the city. Construction remains such as old pylons, concrete barriers and signs like these left lying around, blocking bike lanes, roads and sidewalks are shockingly commonplace.

“Not only an eyesore but confusing and distracting to drivers as well.”