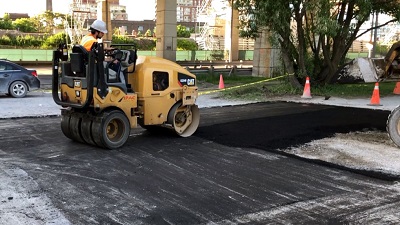 Toronto man takes pothole issue into his own hands

As reported on CTV News, a Toronto man has decided to take the issue of potholes into his own hands.

John Long called in a team of helpers to fill a massive pothole along the Martin Goodman Trail near Cherry Street after he said he noticed many cyclists falling.

“I was paving my area anyways and there was just such a big hole and I was seeing so many people fall off so I just decided to pave it and clean it up a bit and make it safer for pedestrians,” he said on Tuesday morning.

Long said by acting on the fault in the road he was not trying to be critical of the City of Toronto.

“I get along with the city pretty good and I’ve done business with them for many years,” he said. “They are busy, they’ve got a lot of pot holes, a lot of things to fix – they don’t always have a lot of time and I understand it so I took it upon myself to do it.”

Those using the trail on Tuesday morning, thanked Long and one even called him “a legend.”

“I’m not looking for nothing,” Long said. “I just want people to be safe.”

Two people running along the pavement around 9 a.m. stopped to thank Long for his work.

“(The pothole) was just a big, big, big puddle and you had to go around or try to find your way around and you just couldn’t, it was craziness,” one of the runners said. “This was a nice surprised.”

Long said he notified his local city councillor, Paula Fletcher, of his action.

“She was very, very impressed that I did it, surprised, but she knows what I’m like,” he said. “She knows and she’s very, very happy.”

Mayor John Tory said Long’s efforts are definitely a help but he does not recommend everyone start following suit.