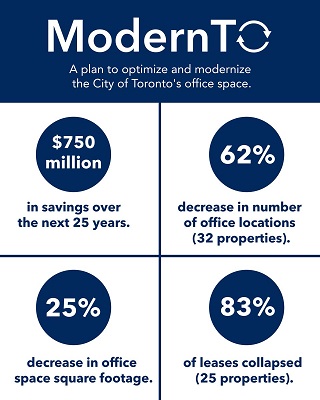 Toronto City Council unanimously approved the next phase in ModernTO – the modernization plan to reduce the City’s office footprint from 55 to 15 locations and unlock eight City-owned properties to enable the delivery of affordable housing and other key City priorities.

Mayor Tory launched ModernTO in 2019 to make sure the City was using its office space as efficiently and effectively as possible. The COVID-19 pandemic has accelerated the City’s move to a hybrid office environment and helped prove this plan will save money and strategically make better use of City real estate assets.

The program will reduce the City’s office locations from 55 to 15 primarily by ending leases and creating office hubs within key civic buildings including City Hall, Metro Hall and the civic centres in Scarborough, North York, and Etobicoke.

This will also unlock eight City-owned properties with an estimated land value of $450 million for city-building purposes, including the delivery of affordable housing, City services and other priorities. These sites include:

It is anticipated that the majority of the value will be invested into city-building benefits with an emphasis on affordable housing, while a portion will be allocated to the Land Acquisition Reserve Fund (LARF) as per City Council direction. By repurposing these sites, the City is able to explore how it can make better use of public land and leverage the land value to build more vibrant and livable communities with greater investments in city-building priorities.

Across the portfolio, the plan proposes to deliver between 500 to 600 affordable rental and ownership homes in prime downtown and midtown locations, as well as infrastructure and service improvements and new institutional and civic spaces while contributing funds towards future strategic land acquisitions through the LARF.

The $450 million land value, estimated based on input from third party real estate appraisals and current market conditions, is a high-level estimate of the current market value of the eight properties, and is intended to provide guidance on the estimated land value available to be leveraged to deliver identified city-building priorities across the ModernTO sites.

While redevelopment opportunities for each site are not yet fully determined, CreateTO, the City’s Corporate Real Estate Management division, City Planning and other City agencies have undertaken a preliminary due diligence and site visioning process which has informed the overall portfolio objectives and proposed outcomes.

Based on the estimated timeline to unlock these properties, the eight properties have been divided into two key groups, with five sites, including 610 Bay Street, 277 Victoria Street, 931 Yonge Street, 95 The Esplanade and 18 Dyas Road to be repurposed in the short term. Significant infrastructure projects are being undertaken on or adjacent to the remaining three properties, which will be unlocked in the longer term. Redevelopment opportunities will be determined with input from local councillors, impacted communities, current occupants, City divisions, as well as external partners.

Public services currently being delivered on these sites, including The Works at 277 Victoria Street, will remain available to the community, and robust communications will take place well before any City services are relocated.