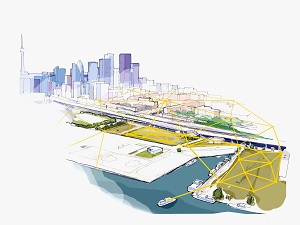 As reported in The Globe and Mail, Sidewalk Labs, the unit of Google-parent Alphabet Inc. set to turn a chunk of Toronto’s waterfront into a test bed for “smart city” technologies, took pains at a public meeting Tuesday night to address fears its plans would see citizens spied upon or their governments’ authority usurped.

Hundreds of people packed a room at the Metro Toronto Convention Centre to attend “public round table” sessions put on by Sidewalk and Waterfront Toronto, which last fall picked the three-year-old New York-based company to help develop − for a start − a 12-acre parcel called Quayside.

Sidewalk, which is led by Dan Doctoroff, a former deputy mayor of New York City, has previously outlined an array of concepts for the project that range from streets lined with sensors that can help tweak traffic lights to robot garbage trucks that run in underground tunnels. But the project has raised concerns about privacy and the possible commercialization of data collected from unwitting residents − concerns voiced during Tuesday’s question-and-answer session.