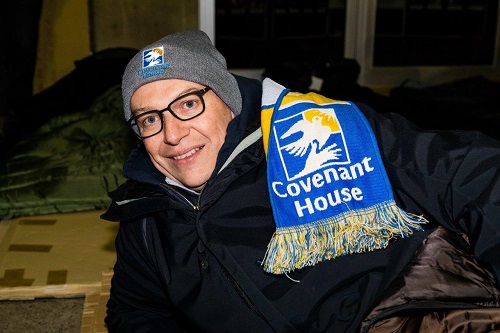 Top Execs Sleep on the Street to Raise $1.1M in One Night for Homeless Youth

Toronto, ON (November 20, 2017) – On November 16, 2017, PCL Constructors Canada Inc. (Toronto) vice president and district manager Bruce Sonnenberg was among 70 of Toronto’s business and community leaders who slept on the street to raise an astounding $1.1 million in support of homeless youth who depend on Covenant House Toronto.

The 6th annual Covenant House Toronto Sleep Out: Executive Edition included prominent leaders in the construction, real estate development, investment and commercial sectors, among others. All spent the night outside with only a sleeping bag and piece of cardboard to raise awareness and much-needed funds for the agency, while getting a small glimpse of the hardships that kids can face on the street.

Bruce Rivers, Covenant House Toronto executive director, says that as many as 250 young people depend on the agency’s support every day. “We are most grateful to the business community for such generous support of this life-changing experience,” Rivers says. “Our goal is to help shine a light on the plight of homeless youth and raise funds to help us give our kids the support they need to build better futures.”

The night marked Sonnenberg’s fourth time sleeping on street in support of Covenant House Toronto. Raising $45,005.00, Sonnenberg was the third top fundraiser among the group who collectively beat their $1 million fundraising goal, which brings the total amount raised at all six events to more than $6 million.

The following captures Bruce’s experience, as well as his sincere gratitude to the generous family members, friends, and colleagues in the development, design, and construction industry who supported his journey:

To everyone who supported my Sleep Out with Covenant House Toronto:

Thank you for your contributions to this amazing organization. I once again had an experience of a lifetime, and learned more about how large and extensive the homeless youth issue is here in Toronto. I also learned, through discussions with homeless youth, of the great work Covenant House does to give them the hope and confidence they need to re-enter society as stable, contributing citizens.

My evening began by having supper at a table with a homeless youth. A young man shared parts of his life story in Toronto that were difficult for me to comprehend. He explained how he started his life on the streets at a very young age, as he had no family support. A number of his family members are in the prison system. A shocking number of his best friends have been murdered and he has had to fend for himself for years. He defined a successful day as a day that he could get home to bed alive. His life goal was to survive to the age of 19. He shared his story with hope in his eyes, however. He discovered Covenant House a number of months ago and is now working on completing his high school diploma. He then plans to enroll in college with the intent of becoming a youth worker. His life goal is no longer just survival, it’s now working at Covenant House when he graduates to help others who are living a life similar to his. It made me realize how minor my day-to-day challenges are.

I also sat through a small group discussion on street gang activity in Toronto. This discussion was led by a former gang member who has turned his life around and is now attending university. He is working in the community to help youth get out of a life of violence. Again, this was an eye-opening presentation that showed how big this problem is and how Covenant House is helping youth caught in gang activity to turn their lives around.

The Sleep Out was a little colder than last year. We each received a sleeping bag and cardboard on which to sleep. Coincidentally, we took up residence for the night close to Gerrard and Church Street, directly across from the Ryerson Centre for Urban Innovation, a project currently under construction by PCL. I have spent some late nights working at construction sites in my day, but the stark contrast in looking up at a PCL site from the ground in the middle of the night was a defining moment for me.

My night was generally uneventful, but I again experienced the sounds of Toronto at night. The city really changes after 2 a.m. and the sounds punctuated by sirens are completely different than Toronto during the day. I didn’t have an encounter with a rat this year, but still received a good taste of what our homeless youth experience every night. I came home to a warm house, a wonderful family, and a soft bed! Street youth face only more cold days and cold nights, with no support. I can assure you that your donations will go a long way to providing hope and help to these vulnerable kids.

May you all be blessed for your generous contributions.

This fundraising initiative is part of an international movement that saw more than 1,100 executives in 19 cities across North America raise needed funds to combat teen homelessness in support of Covenant House. Gathering on the Thursday night of the week prior to American Thanksgiving, these business leaders stand vigil for homeless youth and wield their influence to raise awareness and critical funds for the poorest and most vulnerable among us. The Executive Sleep Out effort was also augmented this year by the first-ever Sleep Out America effort, in which people from all over the United States stepped out of their homes to sleep outside to benefit Covenant House.

Donations are still being accepted. For more information about the Sleep Out and its participants, or to make a donation, please visit executivesleepout.ca.

Covenant House Toronto is Canada’s largest agency serving at-risk, homeless, and trafficked youth and offers  a wide range of services and support. To do this, the agency relies on donors for more than 80 percent of its $27-million annual operating budget. Since opening its doors in 1982, Covenant House has served almost 95,000 young people. For more information, visit covenanthousetoronto.ca.

PCL is a group of independent construction companies that carries out work across Canada, the United States, the Caribbean, and in Australia. These diverse operations in infrastructure, heavy industrial, and buildings markets are supported by a strategic presence in 31 major centres. Backed by PCL’s 110-year legacy, and with more than four decades of experience in Southwestern Ontario’s dynamic construction market, the Toronto office is PCL’s largest district with more than 550 of the construction industry’s most-talented professionals and an annual construction volume of more than $1.0B. For more information, visit PCL.com/Toronto.