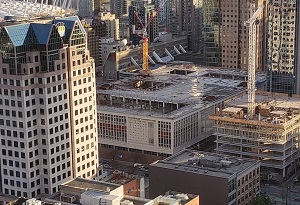 As reported in the Vancouver Sun, Canada is punching well above its weight in terms of the country’s overall intensity of new office construction when compared to developers in the United States.

Developers in Canada are currently building about 20.7 million square feet (MSF) of new office space across the country, with just over 89 per cent of that in Toronto, Montreal and Vancouver. South of the border, U.S. developers are putting up just under 126 MSF, with about 79 per cent of that space in American cities larger than 2.4 million residents, according to a new Spark Report by Colliers International.

When the amount of new office building projects for each country is compared to the total existing size of the respective office markets, Canada is building nearly twice that of the U.S., the report said.

Canada’s economy has been attracting a lot of international interest and most of those companies want to operate in office towers in our big cities, Hennigar said.

“The amount of pre-leasing that has been going on is a bit of a who’s who of international tech firms,” he said.

Meantime, co-working brands like WeWork and Spaces are also soaking up a lot of the new and existing space to make way for entrepreneurs, start-up companies and satellite branches for international firms.

“(The fresh demand) is really helping to create a sense of scarcity for space and Canadian developers have responded in kind with quite a large amount of new construction,” Hennigar said.