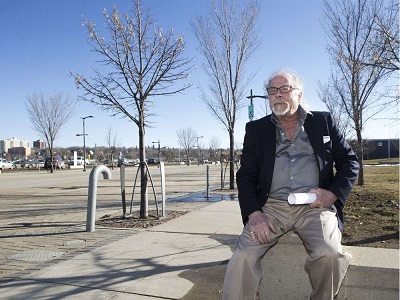 As reported in the Saskatoon StarPhoenix, Marvin has returned to Saskatoon, the city he abandoned decades ago in the wake of the vote, to try to stir up renewed support for the site south of the Saskatoon Farmers’ Market building.

City hall has decided that a new arena, possibly combined with a new convention centre, will be built downtown in favour of continuing to upgrade suburban SaskTel Centre and TCU Place.

“Bravo for coming to the realization that it should be downtown,” Marvin said in an interview this month at the former site of the A.L. Cole power plant. “Now, I think we’re at a pretty critical point in the discussion to try to find out where in the downtown would it best suit the city, the taxpayers of the city.”

In the wake of the divisive 1985 arena decision, voters supported a second referendum endorsing the construction of the suburban arena now known as SaskTel Centre.

Marvin said he left the city because he did not want to watch Saskatoon’s downtown deteriorate.

He is promoting an even grander plan this time, a public-private partnership (P3) project that would include four residential towers with an arena/convention centre in between.

The success of the 126-unit condominium tower being built on Parcel Y at River landing has shown the demand for riverfront residential condos, Marvin said.

He has obtained a letter of intent from Victor Lam, the CEO of an entity known as Saska Land Development Holdings Corp., that includes a strategy to help pay for the arena/convention centre.

The letter suggests up to 20 per cent of the profits from the residential towers would go toward the construction of the arena/convention centre, which could cover up to one-third of the cost.

Lam acknowledged his company has not built any projects in Saskatoon. Marvin said Lam’s associate, Zhusheng (Johnson) Yan, has built major residential projects in China and shared photos of apartment buildings and a hotel tower.

Lam said it’s too early to know how much money would need to be raised from investors, but he’s confident he can find investors in Vancouver and China. Lam, Yan and Tony Ding met with Mayor Charlie Clark a year ago to express their interest in pursuing projects in the Saskatoon region.