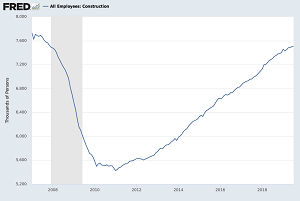 As reported on Yahoo Finance, since the Great Recession, the U.S. has seen a major shortage of workers in the construction industry.

“The labor shortage, specifically in the residential construction side, has been kind of a uniquely post-Great Recession experience,” Rob Dietz, Chief Economist at the National Association of Home Builders, told Yahoo Finance.

The construction industry lost approximately 1.5 million jobs during the financial crisis, according to FRED data. The industry has not yet gained back those jobs, with Dietz describing it as a “sluggish process.”

“The JOLTS data says we’re short about 350,000 workers,” he said. “The skilled labor shortage has gotten progressively more challenging as this lengthy growth cycle has continued. The impacts of it are … how long it takes for an individual homeowner to access a remodel, or how long that project will take. Those duration times have gone up.”

Dietz said “there’s a whole set of limiting factors” for the construction industry over the last 10 years.

Dietz refers to these factors as the five L’s in building: lack of labor, lack of lots, lack of lending for builders and land developers, lumber and material issues, and law issues.

Keep reading and watch the news video on Yahoo Finance