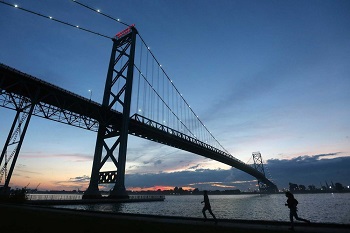 A new front in Donald Trump’s trade wars could be the Detroit River and the bridge across it. Opened in 1929, the Ambassador Bridge is a critical trade artery linking the U.S. and Canada. About $100 billion in commerce crosses it annually, a figure just shy of U.S. trade with the U.K. Now the fight to replace the aging span has reached the Oval Office.

Both the Canadian government and the bridge’s private U.S. owners, the Moroun family, plan to build rival bridges not far from where the Ambassador connects downtown Detroit with Windsor, Ont. The race has been marked by bad blood and court battles, spanning successive governments in the U.S. and Canada. Patriotic themes suffuse both campaigns. The Canadian bridge is dubbed “the Gordie” after ice hockey icon Gordie Howe. Meanwhile, the Morouns have been appealing to Trump’s Buy American instincts, asking him to intervene. Matthew Moroun—who took over his family’s transport company from his father, the combative, publicity-averse Matty Moroun—wants Trump to rescind a key waiver granted by Barack Obama in 2012 that exempted the Canadian bridge from having to use only U.S. steel.

The saga might get more interesting. Among the bidders vying to build the Gordie is a consortium including Aecon Group Inc., whose proposed takeover by a Chinese company is being reviewed by Justin Trudeau’s government on national security grounds. That raises the prospect of a bridge being built into Detroit by a Chinese company, for the Canadian government, under an exemption from Buy American rules, and over complaints from a U.S. company.

Keep reading this blog on Bloomberg.com