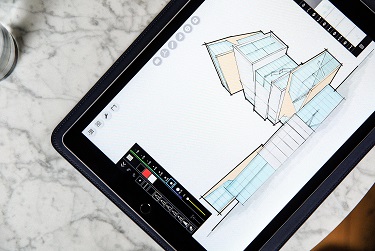 Technology has changed the way many architects work. Portable touchscreen devices, along with the latest software applications, have streamlined the way they create, share, edit and export things like schematic design, design development and construction documents. The devices architects use have also evolved. No longer is it a given that they’ll use a Windows device; Macs now support AutoCAD, too. In fact, there are more and more reasons for architects to switch over to Apple. The main reasons being the iPad Pro and Morpholio’s Trace, an award-winning iOS app designed for architects, by architects.

Trace gets its name from the large sheets of yellow tracing paper that architects have depended on for years. The app, available for iPhones and iPads running iOS 9.3 or later, is really optimized for the new iPad Pro, with ProMotion technology and really fast screen refresh rates (up to 120Hz); according to Toru Hasegawa, one of the co-founders and architects behind Trace, drawing a line on it versus on paper is “almost indistinguishable.”

Trace is much more than a digital tracing tool, however. It’s designed to help all aspects of an architect’s workflow, from idea conception to schematic design and illustration to making renderings. It has a number of smart tools, such as rulers and protractors, that allow the architect to quickly draw a perfect line or circle; its “Instant Scale” feature allows the architect to set anything to scale, like a person or a tree, and see how it matches up whatever else is in the scene or drawing. Trace’s illustrative toolset allows them to make beautiful final stage renderings, too, just look at these by architect Alec Yuzhbabenko. (The only thing that Trace really can’t do is CAD drawings because, according to Hasegawa, you really need a mouse and keyboard for that. The idea is you can draft those on your Mac or PC, and then import them onto your iPad Pro or iPad.)