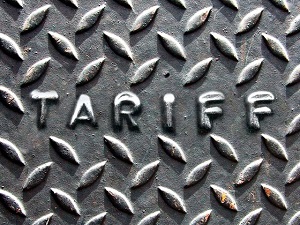 President Donald Trump’s recently imposed tariffs on foreign steel and aluminum have not yet gone into effect. But they are already affecting deal negotiations, bottom lines and construction pricing in commercial real estate.

Some in the sector say they have seen around a 10 percent increase in the price of steel—a material whose prices have already been rising—since the tariffs were announced earlier this month. The price increase—and the uncertainty over future increases—has caused some to rework and reconsider planned projects.

Paul Rohrer, a real estate partner at the law firm Loeb & Loeb in Los Angeles, has been working on a $300 million, 500,000-sq.-ft. high-rise office building in Los Angeles for nearly a year. The goal had been to build the office for a set price—the firm’s clients tend to be entities like the government that don’t typically work in real estate and seek such contracts to reduce their risk. Now that the firm is working on the underwriting stage for the bond that will finance the project, a contractor has notified Rohrer that the project cannot be built at a fixed price—a “steel tariff contingency” needs to be added.

“The problem is that nobody at this point is really able to underwrite the value of this uncertainty, which causes a distortion in the market and could cause deal flow to slow down until folks figure out what to do,” Rohrer says.

Trump’s imposition of tariffs—10 percent on foreign aluminum and 25 percent on foreign steel—excludes Canada and Mexico, and the president also signaled that Australia might be exempt from the taxes as well. In his proclamation related to steel, Trump said the move was to protect national security. The U.S. is the largest importer of steel in the world.

The domestic steel industry heralded the levies, set to go into effect later this month. Thomas J. Gibson, president and CEO of the American Iron and Steel Institute, an industry group, said in a statement that the tariffs are critical to getting U.S. steel workers back to work and “stemming the tide of unfair foreign imports.”

While Trump backed off on subjecting Canada and Mexico to the tariffs, the price increases are still being translated throughout the construction sector, as the steel industry works to hedge any risks once the tariffs go into effect, says Joe Pecoraro, project executive at Skender, a general contractor in Chicago. “Some of the price increases are speculative, in a way, because construction by nature—you’re always looking six to 12 months ahead,” Pecoraro notes.

The price uncertainty has led one of Skender’s affordable housing developers to notify the firm that if prices continue to rise, the project will have to be delayed—there are no excess funds. “Uncertainty drives people to be very conservative, risk-averse. It is affecting our deals,” Pecoraro says.