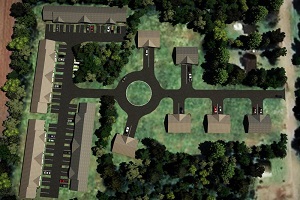 As reported by the Journal Pioneer, it was what some residents in the Spruce Drive area might call a win. Some city councillors and pair of housing developers, however, would disagree.

On Tuesday, Summerside city council voted against the proposed rezoning of 29 Spruce Dr. following weeks of unrest among residents in the area.

The decision pitted councillors against each other, with councillors Bruce MacDougall, Justin Doiron, Carrie Adams and Brian McFeely voting against the motion and councillors Barb Ramsay, Norma McColeman, Cory Snow and Greg Campbell supporting the resolution.

Deadlocked, it was Mayor Basil Stewart who had the final say.

Reacting to the mayor’s decision, members of the public who were present clapped in support. But Stewart wasn’t finished.

“This is not easy for anybody to vote here tonight. I was like everybody else and put a lot of thought into it.”

The application to rezone the property was brought forward by Abbott and Langille Inc. earlier this year. They purchased the property from Clifford, Vanessa and Melissa MacQuaid. While under the previous owners, a compromise was made with residents that reduced the number of row-houses set to be built at the site.

Trevor Abbott, one part of the building duo, said the decision took him and his partner by surprise.

“It caught us off guard. We think it’s unfortunate that it got turned down. We had big plans for it. We wanted it to be senior-friendly, accessible housing in a quiet area of town.”

The partners were looking to build a total of 42 units over R2 and R3 zones in the property. There would have been 30 units in R3 and 12 (six duplex units) in R2, said Abbott.

“The original plan would have allowed the owners to build up to 16 units in the R3, and we were planning for eight duplex units, making it another 16 units.”

This brings the total to 32 units.

“I understand public outcry, we have 20 years of experience each of us in this industry. But if you don’t grow with change, you’re going to be left behind.”

Councillors MacDougall and Ramsay seemed to have the strongest opinions on either side of the spectrum about the development.