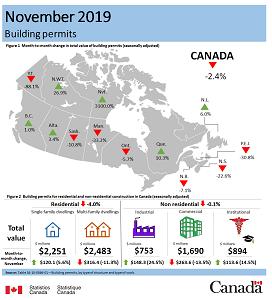 Statistics Canada reports that total value of building permits issued by Canadian municipalities decreased 2.4% to $8.1 billion in November. Declines were reported in six provinces, with the largest decrease in Ontario (-5.7% to $3.2 billion). Quebec (+10.3% to $1.9 billion) offset some of this decline.

Not including Prince Edward Island, permits for multi-family dwellings were down in all provinces, decreasing 11.3% to $2.5 billion.

The total value of permits for single family dwellings offset some of this decline, rising 5.6% to $2.3 billion, led by Ontario (+$78 million) and British Columbia (+$41 million).

Increase in industrial and institutional permits

Non-residential permits were largely unchanged in November (-0.1%), however there was notable movement within the components.

The value of industrial permits rose 24.5% to $753 million. The majority of this gain was attributable to a high value permit for an organic waste management facility in Québec City.

Meanwhile, the value of institutional permits rose 14.5% to $894 million, largely due to gains in the province of Quebec (+$209 million) resulting from building intentions for healthcare and educational facilities.

The total value of permits issued in Nunavut jumped from $500,000 in October to $16 million in November. The increase was largely due to a mixed-use residential and commercial project in Iqaluit. This was the largest increase in the value of residential permits in Nunavut since December 2018.