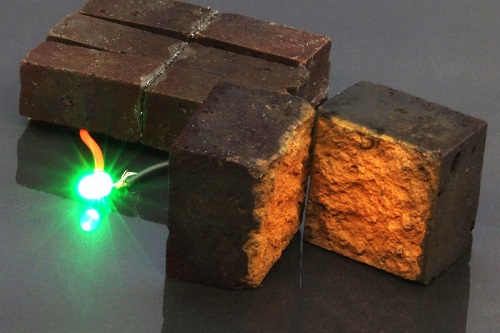 Smart bricks store energy in the walls themselves

Boring old bricks might not seem like something that can really be made high-tech, but researchers keep proving us wrong. Now, a team has found a way to turn bricks into energy storage devices, using them to power a green LED in a proof of concept study.

A brick wall doesn’t exactly do much – sure it holds up the roof and keeps the cold out, but maybe the bricks could pull their weight a bit more. That was the goal for a team of scientists at Washington University in St Louis, who wanted to test whether bricks could be used to store electricity.

The team started with regular red bricks, then gave them extra abilities by coating them in a conductive polymer called PEDOT. This stuff is made up of nanofibers that work their way inside the porous structure of the bricks, eventually turning the whole into “an ion sponge” that conducts and stores energy.

In particular, these bricks become supercapacitors, which can store larger amounts of energy and be charged and discharged more quickly than batteries. They can be stacked together to make a bigger or smaller energy storage device, and the whole wall is then finished off with a coat of epoxy to keep the elements out and the electricity in.