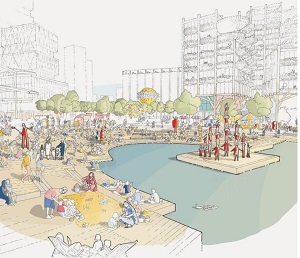 As reported on CBC News, Sidewalk Labs laid out its ambitious vision of the future of cities with its plan for Toronto’s eastern waterfront, but has already received fresh criticism for its potential overreach.

The plan sets out what Sidewalk Labs, a subsidiary of Google parent-company Alphabet Inc., hopes will be a blueprint for urban development that will incorporate the latest concepts in building  design, mobility, sustainability and inclusivity.

It hopes to achieve nothing less than to improve everything about how people work and live, Sidewalk Labs CEO Dan Doctoroff said at a media presentation Monday.

Our proposal aims to do something extraordinary on Toronto’s eastern waterfront — create a new model of inclusive growth, where cutting-edge technology and forward-thinking urban design combine to achieve an ambitious improvement in every aspect of the way we live.”

Sidewalk’s proposal sets out detailed plans for a residential-focused 4.8-hectare Quayside site, but also goes much
farther to envision the foundations of a 77-hectare eastern waterfront district along similar design ideals.

The expanded scope includes its proposed development of a nearly eight-hectare site called Villiers West where it wants to build a new Google Canada headquarters along with attracting other office tenants.

The scope of the vision has been raised as a concern by Waterfront Toronto — a partnership involving the City of Toronto, Ontario and the federal government to oversee waterfront development — that is now reviewing the more than 1,500-page plan.