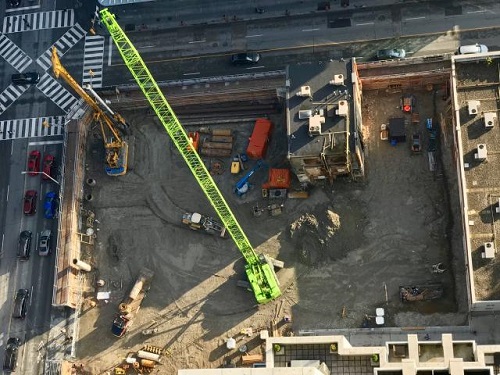 Following an official ground breaking held last month to mark the start of construction for Mizrahi Developments‘ The One, shoring work has begun at the Yonge and Bloor site of the supertall tower by Foster + Partners and Core Architects. Before excavation down to a depth of four storeys can begin, crews from GFL’s Anchor Shoring division are working to build an earth retention system around the site’s perimeter.

Like at the nearby projects Uptown Residences to the west and One Bloor East to the east, because of the water table height here, shoring for The One is will be a watertight caisson wall system. Views of the site reveal that a series of hollow steel cylindrical piles have been driven vertically into the earth along the site’s northern edge. An auger is then inserted to drill out the earth within the piles. Next, steel and concrete are added to create a vertical reinforced column. The cylindrical steel collar is then removed, and the process is then repeated dozens of times, until an underground concrete “bathtub” has been formed around the site.