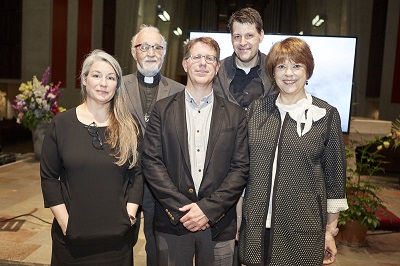 MONTRÉAL, June 4, 2018 /CNW Telbec/ – At a press conference this morning at the Oratory Basilica, Saint Joseph’s Oratory of Mount Royal revealed the winner of the multidisciplinary architectural competition launched last December. The jury followed a rigorous process to evaluate the offers from the four finalists according to well-defined selection criteria. The concept behind the winning project incorporates physical, historical and spiritual elements into the reconfiguration design for the inside of the Basilica’s dome and the museum spaces, which will give access to Montréal’s highest vista.

The members of the jury deliberated on May 15th and 16th, taking the time to appreciate the exceptional quality of the proposed projects. They made the unanimous decision to recommend to Saint Joseph’s Oratory the project put forward by the following team:

“The winning team stood out for their in-depth analysis of the project and the ingenuity of their proposed concept,” said jury president Carlo Carbone, architect and professor at UQAM. “They had a clear, well thought out and pertinent approach. The jury found that they had demonstrated a particular attentiveness to the needs of Saint Joseph’s Oratory, with their project demonstrating respect for the existing infrastructure and an emphasis on the presentation of the sites”.

The winning concept: discovering the self and the world, from earth to the heavens
The proposed experience features a pathway through the museum and inside the dome, extending the Oratory’s pilgrimage experience during an ascent that is physical, historical and spiritual. The proposed architectural layout will take the form of a drapery that reveals the Oratory’s different construction periods, and defines while unifying the experience throughout the pathway. The staging, materials and architecture will work together to guide the visitors through the various stages of the ascent, creating an intimate experience with the space that will be interpreted in a personal way for each visitor and act as a tool for discovering the self and the world.

“The selected project honours the importance of having a design that aligns with the historic mission of Saint Joseph’sOratory of Mount Royal and finds an exemplary way to achieve the vision of those who first built the Basilica,” said Father Claude Grou, C.S.C., rector of Saint Joseph’s Oratory. “Visitors to the sanctuary will be able to discover the inside of this massive dome during their contemplative ascent and appreciate the sheer size of the site and the breathtaking view of the city from the lantern.”

The competition
Saint Joseph’s Oratory is very pleased with the interest shown in the competition and the quality of the projects submitted. Eighteen teams in total participated in the two-step selection process. This approach gave the Oratory access to the best possible creative ideas while ensuring optimal use of the public funding that will be invested in this exceptional building’s future.

The project
The sanctuary continues to undergo its major renovation project. The next phase of the sanctuary’s major development project includes the erection of a new welcome centre, integrated into Mount Royal’s topography, as well as landscape work on the site and improved lighting, which will begin in 2018 and last two years. The final stage of the project, covered by this architectural contest, is slated to start in 2020. Showcasing the inside of the Basilica’s dome and creating an observatory at the top responds to the wishes frequently expressed by visitors to the sanctuary and will create a major tourist attraction for the city.

This major development project will require a total investment of nearly $80 million, with the Government of Canadacontributing nearly $22 million, and the Government of Québec investing over $30.8 million. The government contributions will come from the Grands Projets component of the Fonds Chantier Canada-Québec and the Programme d’infrastructures Québec-Municipalités. The City of Montréal also confirmed a $10 million contribution. With the support of its Foundation, Saint Joseph’s Oratory will assume the remaining costs, totalling over $17.2 million.

“Investing in cultural infrastructure helps build strong communities and support economic growth,” said the Honourable Mélanie Joly, Minister of Canadian Heritage and MP for Ahuntsic-Cartierville. “Congratulations to the winners of this architectural contest who will bring to life the vision for a refurbished dome at Saint Joseph’s Oratory Basilica. The completed work will highlight the site’s historic and cultural heritage and enhance the visitor experience, contributing to tourism growth in Montréal.”