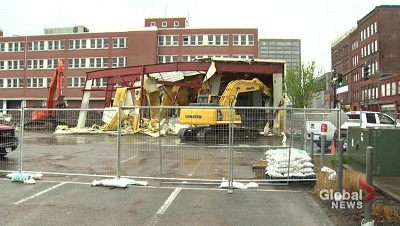 As reported on Global News, a former heritage officer in Saint John believes the city is throwing away millions of dollars when it demolishes old buildings.

Jim Bezanson, a heritage development officer with the City of Saint John for 24 years, also believes there is money to be made in salvaging reusable material.

Bezanson spoke at a forum on demolition, deconstruction and salvage, presented by Heritage Saint John.

Citing a 2018 report on building debris in the city, and what to do with it, Bezanson said deconstruction rather than demolition is beneficial in a number of ways.

He said up to 95 per cent of construction materials in many buildings can be recycled, but is thrown away in most cases.

“We have public policies that encourage people to buy a beverage bottle, consume the product, wash it, take it back to the redemption centre and accept half what what they paid for (in deposit) initially,” he began. “We have no such policy for buildings, which are usually the biggest, largest, most important financial investment of anybody’s lifetime.”

Bezanson admits deconstruction can take longer than demolition, but he said it can create jobs for people who need them. Those people, now employed, could conceivably purchase homes already knowing how to maintain them.

Olive Hawkins, the co-founder of The Beet Collective, an organization focused on creating sustainable housing, said recycling and salvaging materials can happen with any property.

“We’re talking lots (in the forum) about the heritage-designated houses,” Hawkins said. “But we believe all spaces, not just those designated heritage, but all spaces can be redeemed and brought back and made into healthy homes for people.”

Bezanson said he has deconstructed two buildings in Saint John, and sent about 45 tons of materials to landfill sites. But he says by salvaging and reusing everything from bricks and windows to floor joists, he figures he’s saved almost 500 tons from ending up in the garbage.