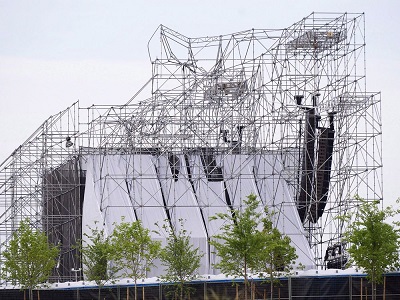 As reported in the National Post, metal structures meant to hold a roof over a stage during a Radiohead concert in Toronto were the first pieces to fail as the entire setup came crashing down nearly seven years ago, killing the band’s drum technician and injuring several others, a coroner’s inquest heard Monday.

A Ministry of Labour engineer who helped investigate the collapse was among those who testified as the inquest into the death of Scott Johnson got underway.

Saeed Khoorsand said the pickup trusses bearing the weight of the roof grid — which itself held tens of thousands of kilograms in lighting and other equipment — were “the weakest link in the stage that caused the whole roof system to collapse.”

Khoorsand also pointed to some discrepancies between the plans and the materials used in building the outdoor stage, noting the trusses at the site weren’t as thick as they should have been according to the drawings, while some beams were larger.

The plans had been reviewed and checked by an engineer, Domenic Cugliari, just over a week before the incident, he said.

Johnson, who was Radiohead’s drum technician, was crushed by the falling roof and died just hours before the band was set to take the stage at Downsview Park on June 16, 2012.

Charges in the case, against Cugliari and others, were stayed because the matter took too long to get to trial.

The inquest, which is expected to hear from roughly 25 witnesses, will examine the circumstances around Johnson’s death, but will not assign blame. A jury may make recommendations aimed at preventing similar incidents.