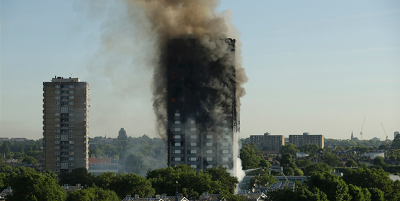 Six months after flames engulfed a London high-rise and sparked concerns about similarly-clad buildings around the world, a U.S.-based fire prevention group has developed a tool aimed at making buildings safer.

The National Association of State Fire Marshals’ research foundation says its free risk evaluation tool will be available on its website after Jan. 1.

Combustible exterior paneling fueled the flames that enveloped Grenfell Tower on June 14, killing 71 people, authorities said. An Associated Press review found the same panels on several U.S. buildings, and some of the owners were unaware of the potential danger.

The fire marshals group says the new Risk Evaluation Matrix can help assess fire risks based on materials used, a building’s occupancy and other criteria.

The goal is to enable fire marshals, building owners and others to make their structures safer through a rational and scientific approach, said Nick Dembsey, professor of fire protection engineering at Worcester Polytechnic Institute in Massachusetts, which contributed research that went into developing the assessment tool.

The researchers found evidence of a troubling trend: An over-reliance on sprinkler systems. Sprinklers are effective in many fires, but they should not justify cutting corners on other fire prevention measures, fire officials say.