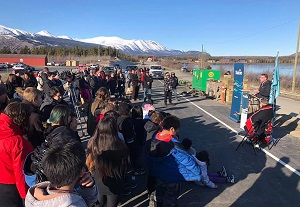 As reported in the Whitehorse Daily Star, after two years of construction, the Nares River (Naataase Héen) Bridge replacement in Carcross is finished.

The project cost approximately $15 million, after being originally budgeted at $12.6 million. It replaces a wooden structure which was almost 50 years old.

They were joined by project teams from the the Carcross/Tagish Development Corp. and Ruskin Construction Ltd., the project’s contractor.

The new bridge will go into service next month.

It has wider lanes to better accommodate larger commercial vehicles along the South Klondike Highway and a wider pathway that can be illuminated at night for cyclists and pedestrians.

The Yukon government used a value-driven procurement process that included a First Nation participation plan to address employment and training for CTFN citizens and firms.

“The new bridge will meet future traffic demands along the South Klondike Highway better than the current bridge, which was built nearly 50 years ago,” Mostyn said.

“Working closely with the Carcross/Tagish First Nation, we ensured that this project created direct local benefits to the community.”

The new structure is especially important to developing the region’s tourism industry, as thousands of people per year now visit Carcross, he pointed out.

“As we are the headwaters of the Yukon, we are also the gateway into the territory from Alaska,” Benoit said.

“We are sad to see the last wooden bridge in the Yukon be replaced, but grateful to have a new and safe bridge for visitors and citizens to travel through.”

The light, 17-span bridge was built in 1970 to accommodate mining activity in the area.

The old bridge was not designed to accommodate the large loads and demands of today’s vehicles and was steadily being damaged as a result.

In July, a Carcross resident told the Star he was upset over the new bridge encroaching on his wife’s ancestral property, and the disruptions the construction was causing to their enjoyment of the property.

They erected a blockade to keep work crews off their property.