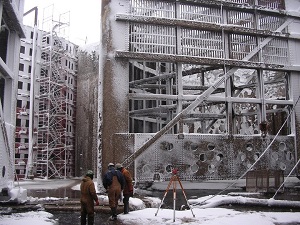 Glen Fry knows the Canso Canal inside out.

A retired engineer, he spent 30 years working on the structure before he retired in 2006.

It’s perhaps no surprise, then, that Fry, 70, has been called out of retirement to help solve a mystery: why the canal’s walls have moved.

Fry said the problem with the walls was discovered during routine restoration and maintenance work on the north gates.

“We were placing our cofferdams last winter and noticed a 50- to 75-millimetre variance at different points from the top to the water level.”

A cofferdam is a watertight enclosure pumped dry to permit construction work below the waterline.

Workers went to the south gates and found a similar change in the wall. Fry said the movement would have happened within the last 10 years.

Even though the movement is small and does not affect the canal’s operations, Fry said they want to find out what’s wrong and correct it. The federal government has issued a tender to discover the cause.