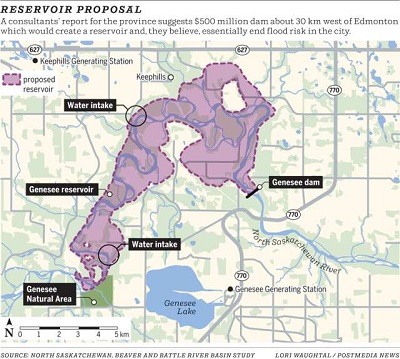 There’s only one way to prevent a massive one-in-100-year flood from hitting Edmonton’s river valley flats one day and that’s to build a massive new dam about 30 km west of the city.

This is a key finding in a study from late 2015 which looked at flood mitigation in the North Saskatchewan River basin. The report for Alberta Environment by Calgary consultants Amec Foster Wheeler was done in the wake of the 2013 Calgary flood that caused $5 billion in damage.

The reports presents a number of conceptual proposals to mitigate flood risk, said Scott Lundy, spokesperson for Alberta Environment, adding that flood mitigation is a top priority for the government.

The provincial government is proceeding with a flood zone map study of the river basin. It’s to be completed by 2020 and will help determine the likelihood of future flooding and which mitigation efforts are needed.

Edmonton has three options for dealing with a major flood event, says the report, which was done by engineers who specialize in water resources. The province could build a $500-million Genesee dam, or spend at least $100 million on dikes along the river in Edmonton, or do nothing. But the report doesn’t recommend the latter: “Although the ‘do nothing and accept the risk’ option is usually evaluated, the consequence of a 1915 magnitude flood event is too significant to be ignored.”

The 1915 flood was so severe it persuaded that now distant generation of Edmontonians to see the valley flats as an area suited for parks, not for homes or businesses. Nonetheless major development has occurred, the report notes. “Currently, seven floodplain areas within the city of Edmonton contain a significant amount of infrastructure that is at risk, including historic interpretive sites (like Fort Edmonton), water and wastewater treatment plants, and nearly 2,000 dwellings occupied by approximately 3,800 residents.”

In the life of an average Edmontonian, there’s a 56 per cent chance they’ll experience this kind of massive flood, the report says. “In other words, it is more likely to happen than not.”

Building protective dikes would cost at least $100 million, the report estimates. About 10 km of dikes are needed, with the Cloverdale, Rossdale and Riverdale community dikes costing $3.4 million, $3.8 million and $4 million respectively. To replace all the lost trees, move infrastructure and restore trail systems would cost $80 million.