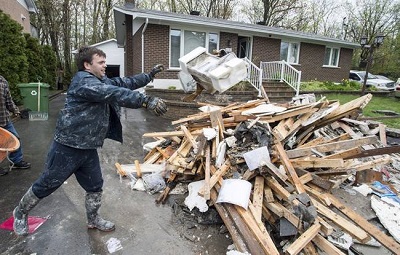 As reported on Global News, those looking to rebuild after this year’s devastating spring floods may be out of luck.

The Quebec government announced Monday it was forbidding new constructions in high-risk flood plains and would not allow homeowners whose properties were flooded to rebuild if damage exceeded 50 per cent of the total value.

High-risk flood plains include mapped areas that fall in the zero- to 20-year flood zone, or an area has a one in 20 chance of being flooded every year.

The government is also forbidding building in areas that were affected by spring flooding in 2017 and 2019.

It does not, however, apply to residents of Sainte-Marthe-sur-le-Lac, where a dike breached on April 27, flooding one-third of the town.

In a press release, the government said the situation in Sainte-Marthe-sur-le-Lac was particular and required the implementation of different solutions.

The dike will be rebuilt, as previously announced, and residents will be allowed to rebuild, even if their home has lost more than half its value.

But no new constructions will be allowed on vacant land.