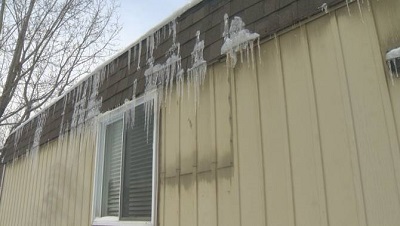 Homeowners in Vaudreuil-Dorion are outraged after their relatively new roof started leaking. They found out the hard way that the contractor they had hired was operating without a valid licence, meaning they’re not insured and are left with little recourse.

The Vaudreuil couple replaced their aging roof last summer to be proactive. They paid close to $6,000 to a West Island roofing company for a brand new shingle roof.

The roof started leaking following last week’s warmer temperatures and the couple claims it caused an estimated $20,000 in damages since some kitchen cabinets, the floor and walls will now need to be replaced.

“I was supposed to have a 10-year workmanship on that roof which made me feel comfortable at first to sign the deal with him,” Eliane Foley told Global News.

The couple tried getting in touch with the contractor only to find out the company recently filed for bankruptcy. After contacting the Régie du bâtiment du Québec (RBQ), they discovered Les Toitures Bel-Air never had a valid licence to operate in the first place.

Keep reading and watch the news video on Global News