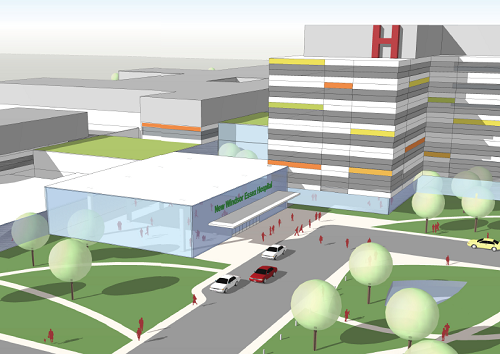 Province of Ontario to move ahead with Windsor mega-hospital

Windsor’s mega-hospital — with an expected price tag exceeding $1 billion — will be one of six new health-care projects in the province to move forward by 2021, according to a document released Tuesday by Infrastructure Ontario.

Windsor Regional Hospital CEO David Musyj would not comment on the announcement by the provincial agency, but he released a statement via email, describing it as “outstanding.”

“It means our new state-of-the-art acute care hospital is a reality and is happening,” he said.

A request for qualifications will be issued in 2021, but a date for issuing a proposal call has not yet been determined, according to the document from Infrastructure Ontario.

In the 2017 market update document, Infrastructure Ontario lists Windsor Regional Hospital as one of its real estate projects in the upcoming years. The project is expected to cost more than $1 billion, according to the document.

As part of the 2017 budget, Ontario proposed to spend an additional $9 billion to support the construction of new hospital projects across the province. Infrastructure Ontario will move forward with six new health-care projects in all. In addition to Windsor, the other projects are Hamilton Health Sciences, Niagara Falls Hospital, Trillium Health Partners, Weeneebayko Area Health Authority in Moosonee, and Kingston General Hospital. Some of the projects have been listed as Design-Build-Finance-Maintain models, similar to Windsor’s, and others are being listed as Design-Build-Finance models.

Windsor’s proposed hospital is to be located at County Road 42 and Concession 9. There have been vocal opponents of the proposed location, lobbying to have the new hospital located closer to the city core. A group, called Citizens for an Accountable Megahospital Planning Process, opposes the selected site south of Windsor airport.

Keep reading in the Windsor Star