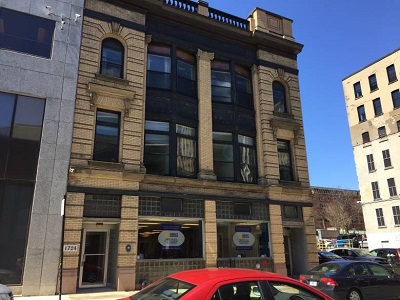 Province of Nova Scotia takes 2 historic buildings off the market

The provincial government has decided not to sell two historic properties across the street from Province House.

For several years, government officials have been working on a process to sell the Dennis and Acadian Recorder buildings and a small parking lot between the two on Granville Street, in downtown Halifax.

The government created a short list of five tender responses and later cut the list to three.

But last week Transportation and Infrastructure Renewal Minister Lloyd Hines said the process has changed. The tender was cancelled and government has returned to the five developers on the original short list, asking them instead to submit a plan for a long-term lease redevelopment of the property, with the province retaining ownership.

Hines said government officials have been “wrestling” with the idea of giving up ownership of the property, and as bids were narrowed down to five they started thinking about the “100-year horizon.”

“Our government’s position is to think long term about that particular corner,” he said.

Given the location — Province House on one side and Halifax City Hall, Grand Parade and St. Paul’s church on the other — Hines said the government couldn’t overlook the historical significance of the area.

“I think we owe it to the people of Nova Scotia and ourselves as government to explore the lease option,”  he said.

Joe Ballard, Heritage Trust of Nova Scotia president, couldn’t agree more. The group advocates for the preservation of buildings that are of cultural, historic or architectural significance.