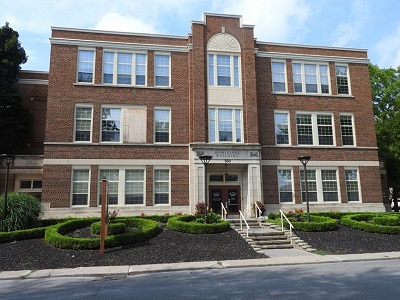 As reported in The Recorder & Times, Prescott council has instructed town staff to go ahead with the remaining renovations to the second floor of town hall with Prescott acting as its own general contractor.

Dan Beattie, director of operations, said a lot of the renovations would be done by public works staff, with the assistance of contracted tradespeople for such work as electrical and plumbing.

The renovations, which will cost about $253,000, would be done in two phases and take roughly three and a half months per phase, Beattie estimated.

The renovations became necessary last year after asbestos was discovered in the ceiling of the town hall, which has built in the 1930s as Prescott’s high school.

The discovery forced the town to close the second floor, which included council chambers, offices and a public meeting room, so contractors could gut it to the stud walls. Files and most furniture were contaminated and had to be thrown out as toxic waste.

The town completed the first phase of the renovations by late last fall, including the council chambers, mayor’s office, an office for councillors, the Ruth Evanson Community Room and part of the main corridor. The rest of the floor remains blocked off and vacant.

The second phase of the renovation – at a cost of $107,126 – will see a new boardroom, an office and control centre, a “physical activity room,” two gender-neutral bathrooms and the rest of the corridor, according to a report from Beattie.

After that’s finished, the town would start the final phase that includes a kitchen and auditorium at a cost of about $146,160.

Council members, with the exception of Coun. Lee McConnell, approved the work this week with the town acting as the general contractor to save money.

Keep reading in The Recorder & Times