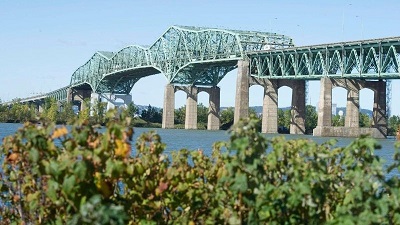 As reported in the Saskatoon StarPhoenix, feeling sad about the old Champlain Bridge closing? Well, the sentimental among us will eventually be able to hold a piece of the old bridge in their hands.

The Montreal-bound side of the bridge was closed on Monday morning, when half the new Samuel De Champlain Bridge was opened. The old bridge will be closed for good as of Friday night and the new bridge will be completely opened to traffic next Monday, July 1, at 5 a.m.

“People who want a piece of history can have one,” Infrastructure Minister François-Philippe Champagne said Monday morning after being one of the first to drive on the new Champlain Bridge. “A bridge that served Montrealers for 60 years, we should give back a piece. We launched that idea yesterday and already people have told us they are interested. Artists have asked us for a piece of the iron on the bridge to turn it into an art work.”

Built in 1962, the Champlain Bridge is actually one of the newer spans going across the St. Lawrence River. However, because it was not built with proper drainage, and because the bridge could not be disassembled and repaired, it had to be replaced. The decision to replace it was made in 2011, and a $500-million program to keep the structure standing began shortly afterward. The old bridge is 3.4 kilometres long and made up of 250,000 tonnes of concrete and 25,000 tonnes of steel.

The Jacques Cartier and Champlain Bridges Inc., the federal corporation that manages the bridges, says it will make sure anyone who wants to will be able to keep a piece of the bridge — free of charge — when the deteriorating structure is demolished.