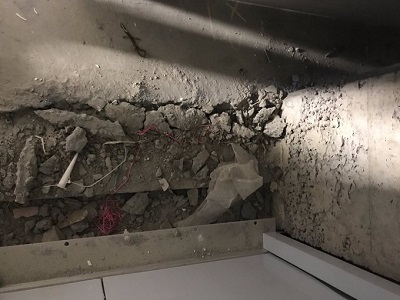 As reported on Yahoo News, photos shared online by Sydney property consultant Edwin Almeida highlight the dodgy work and shortcuts that are rife in the construction industry, he says.

According to him, media reports about recent evacuations of residents from high-rise apartment buildings in Sydney are “just the tip of the iceberg” as a lack of oversight in the construction industry has led to high-rise “death traps” dotting city skylines across the country.

In some cases, the concrete has begun deteriorating before the building has even finished completion.

“It’s a mess, a lot of these buildings will need to get pulled down,” he told Yahoo News Australia. “They’re death traps.”

“I’ve been exposing dodgy developments in buildings for many years,” Mr Almeida said.

“I’ve got somebody in there that worked in that complex for over a year,” he explained about the photos he shared.

“The only people left to expose this are those people working on site.” But complaints often don’t lead anywhere.

“They’ve been trying to expose this with the local authorities for a very long time, but it seems to fall on deaf ears,” Mr Almeida said.

While Sydney built more apartments than anywhere else during the recent real estate boom, Mr Almeida says serious problems exist in other cities and it’s simply a matter of time until more problem buildings become public.