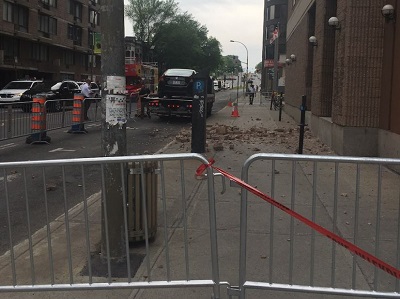 Parts of the outside of McGill’s New Residence Hall fell to the sidewalk on Wednesday afternoon.

No one was injured, but a car was taken away on a flatbed truck.

The Montreal fire department received a call around 3 p.m. to go to the residence hall, which is on the corner of Parc Ave. and Prince Arthur St. in the Milton Park neighbourhood. The firefighters did not need to evacuate the building, but only created a perimeter around a corner of the building.

The bricks fell from a space between two windows on the 10th floor, and laid in a scattered pile along the sidewalk.

Raymond Cherrier, an architect who works with McGill University and who was at the scene, said they did not yet know what caused the fracture.

The residence hall houses close to 800 students during the school year, but is a hotel over the summer.

Zhou Mao Xin is an architect visiting Montreal from Hangzhou, China with his wife. They’re staying in the hotel and returned from sightseeing when they saw the fallen bricks. He said he felt safe staying in the building, but pointed to other buildings on the corner and said they all looked the same.