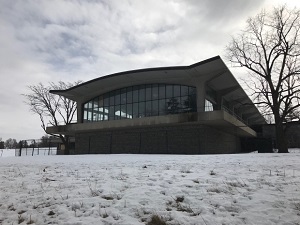 Heritage advocates in Ottawa say they’ll be disappointed if a vacant 1960s cafeteria building is demolished to make way for Ottawa’s new hospital.

The building in question was an annex to the Sir John Carling Building near Dow’s Lake, and is now all that remains of that complex, which was mostly demolished in 2014.

A decade earlier the building had been granted heritage designation, in part because of its unique form, but also because it was designed by renowned architect Hart Massey. The West Annex Building, with its high windows and winged roof, retained its heritage status.

Now, under the terms of a lease signed last week between the federal government and the Ottawa Hospital, the former cafeteria could be demolished. The hospital agreed to attempt to preserve the building, but if it can’t be incorporated into the new Civic hospital the annex will come down and the federal government will pick up the demolition bill.

Michaela Schreiter, a spokesperson for the Ottawa Hospital, said the hospital is looking at options to save the building.

“It is too early to confirm options at this point, but through the next stages of the planning process a plan for the annex building will be confirmed,” she wrote in an email to CBC​

“At this time, no decisions have been made on the demolition of the annex,” confirmed Public Services and Procurement Canada spokesperson Nicolas Boucher.

Leslie Maitland, co-chair of Heritage Ottawa, said losing the annex would be a disappointment.